Colombian BIPoC artist based in Berlin

Martha is since 2021 associate curator at Radial System Berlin and since 2011 artistic director of Plataforma/SurReal Berlin: Ibero-American Festival for Dance, Performance, Installation and Screendance. She collaborates as curator with the Dance Bienal of Cali, Colombia, Barazani Berlin, La Sierra Artist residency & REDIV the Ibero-American network of Screendance Festivals.

In 2021 she premiered the first part of the trilogy HECATOMB at EDEN Berlin and in 2020 the solo/performance AMAZONIA 2040 at DOCK11 Berlin.

Martha got her MA Art in Context at the UdK Berlin and studied Dance in her homecountry and finished her studies in Dancetheatre and SoloDance at the Folkwang University Essen, Germany, under the guidance of Pina Bausch, with teachers such as Lutz Förster, Dominique Mercy, Stephan Brinkmann, Juan Cruz Díaz de Garaio Esanola and Malou Airaudo.

She danced for the Wuppertal Dance Theatre, Münster State Theatre, Schauspielhaus Bochum, Aachen Theatre and performed in various independent productions. Her own creations have been invited to Festivals in Europa, Asia and the Americas. She has been awarded with several prizes and scholarships. Martha founded in 2007 the Colombian - German group PERIFERIC.

Her piece “Autorretrato con Máscara – Self-Portrait with Mask'' was realized with the support of the Spanish Foundation IBERESCENA, obtained the Prize of the Audience at the Festival 100° in Berlin, Sophiensaele 2009 and was selected as the best piece of the season 2009 of the theatre R101 in Bogotá. "Autorretrato..." was nominated for the National Dance Prize 2010 of the Colombian Ministry of Culture. After teaching in Colombia, Martha started working in 2008 as assistant choreographer in Community Dance projects for Josef Eder, Royston Maldoom, and Rhys Martin, among others with the Berliner Philharmoniker and with homeless kids at the National Theatre in Bucarest, Rumania. She worked in Berlin, with the project TanzZeit – Dance in Schools.

2010, her creation “The Second Time in Between”, was produced with the Einstiegsförderung of the Berliner Senate and the Berliner Theatre Dock11. Her choreography "To Die For" had premiere at Sophiensaele Berlin in 2011.

She was guest student of the MA Choreographie of the HZT – Ernst Busch in Berlin.

2012: her piece "Transparente" was coproduced in Bogotá together with the company Danza Común and the Cultural Ministry of the Colombian government. 2013: choreographed the theater piece "Angst" directed by Volker Lösch at Stadttheater Basel in Switzerland, and got the Tanzstipendium of the Berliner Senat. "Transparente" her first full length film celebrated premiere at the American Dance Festival / International Screendance Festival and toured in Europe and South America. She created “Backwards 7” a solo performance exhibition for the Berliner art gallery Musterzimmer.

2014: Martha developed “Doble-Faz” the graduation piece for the 5th year contemporary dance students of ASAB – District University of Bogotá, supported by the Goethe Institut Colombia. She performed at ADA Studio, LaborGras and Tanzfabrik and gave the body training for “Human Requiem” by Jochen Sandig with the Rundfunkchoir. 2015 her solo “Self-portrait with Mask” was invited to the National Museum in Bogotá.

2015/16 she danced with Teodor Currentzis / MusicAeterna and Sasha Waltz & guests at Radial System Berlin, performed Alexandra Pirici´s “FLUIDS” at the Berlin Art Week, and participated with her practice/workshop HEARTS at the Performing Arts Festival and Plataforma Festival in Berlin.

In 2017 with the support of Iberescena she realized an artistic residency with México´s national contemporary dance company: CEPRODAC. Martha performed again for Alexandra Pirici in “Aggregate” at the art gallery Neuer Berliner Kunstverein N.B.K. She worked with Robert (Bob) Wilson and the Rundfunkchor for the production "LUTHER -dancing with the gods-" in the Pierre Boulez Saal. She also performed a solo for the exhibition "PURPOSE" by Reza Miraby at the art gallery Kunstsaele Berlin and directed the Performance Project of the Tanzfabrik Berlin where she shared her practice/workshop HEARTS with the participants. Her solo ANTHROPOMORPHA was premiered at Dock11 Berlin.

Martha developed a duet with the Syrian/Palestine refugee dancer Fadi Waked in Berlin and Potsdam with the support of Radial System and Fabrik Potsdam. The duet was commissioned by Zuni Icosahedron and presented at the Cultural Center of Hong Kong in the frame of the Festival and Forum One Table Two Chairs.

2018 started in Colombia together with Sabine Zahn and the research/laboratory Walk, Sense Talk at La Casona De la Danza with the support of IDARTES and the Berliner Senat in Bogotá.

Martha created a new piece for the CEPRODAC, the national contemporary dance company of México: “IXNEXTIUA”, in coproduction with the ministry of culture of Colombia, she performed “Sitting on a Man´s Head” By Okwui Okpokwasili at KW for the Berlin Biennale and received the Recherchestipendium of the Berliner Senat.

In 2019 she premiered in Berlin as choreographer and performer the piece HYBRIS together with the collective La Quinta del Lobo at Radialsystem. In 2020 she performed for Asad Raza in the frame of Down to Earth at Gropius Bau Berlin.

In 2021 she made part of the jury of the Theather Spektakel Festival in Zürich, Switzerland. 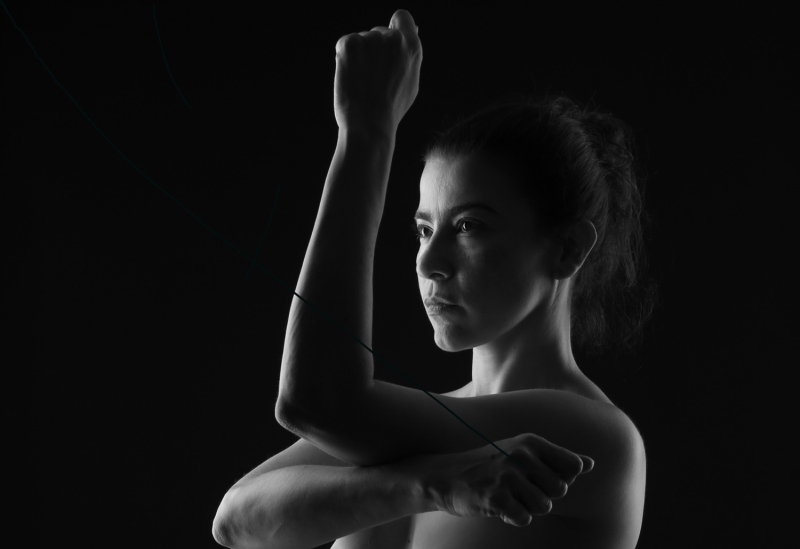 The solo performance AMAZONIA 2040, developed during the pandemic,  reflects about the present, past and future of the Amazonia rainforest and explores the expression and resistance of concepts such as home, habitat and inhabitants in times of climate crisis, activism and disappearance of biodiversity.

Amazonía 2040 is an exciting solo by Colombian choreographer Martha Hincapié Charry. Her Quimbaya indigenous roots make her narrative about the condition of the Amazon particularly compelling.  In duo with a 12 meters video installation, she provides vital information about the state of the Amazon region and about some of its indigenous communitie that are seriously threatened by environmental destruction.
Images of the rainforest, portraits of indigenous peoples, contextualization in places like Chiribiquete and personal storytelling come together in a celebration-meditation; a layered performance that becomes an intimate ritual.

Amazonía 2040 is a celebration of the region and its contacted and uncontacted communities. Excellently developed and executed, numerous striking images confront the viewer with the deterioration of the sacred habitat. Video projections of expanses of plastic and trash in contrast to a large panorama of the region, to give just one example, create a pervasively disturbing effect.

The performance is available in English or Spanish

Thanks to La Sierra Artist Residency. 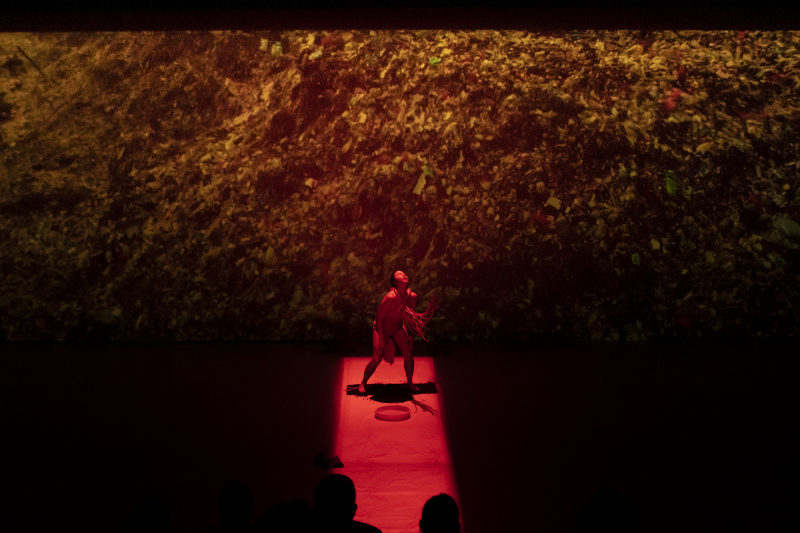 IXNEXTIUA was a pre-hispanic Aztec ceremony, during which women and men were transfigured into animals.  Throughout the night the gods danced together with them.

IXNEXTIUA is the second part of the trilogy – Thoughts About the Anthropocene – which seeks to generate a space for reflection by looking at the past, present and future of humanity, as well as its relationship with nature. The bodies of the 7 dancers  make a journey towards the articulation of the visible with the invisible, of their animality with their most mystical side.

It's a requiem for an extinct world that strangely looks a lot like ours.

The first part of the trilogy, ANTHROPOMORPHA -jaguaring-, was premiered in November 2017 in Berlin. The trilogy asks questions about nowadays crisis in the relationship humans - nature.  It dares a statement on interdependence, mutualism and togetherness and is an attempt to embody our animality and to re-imagine our place in the world. 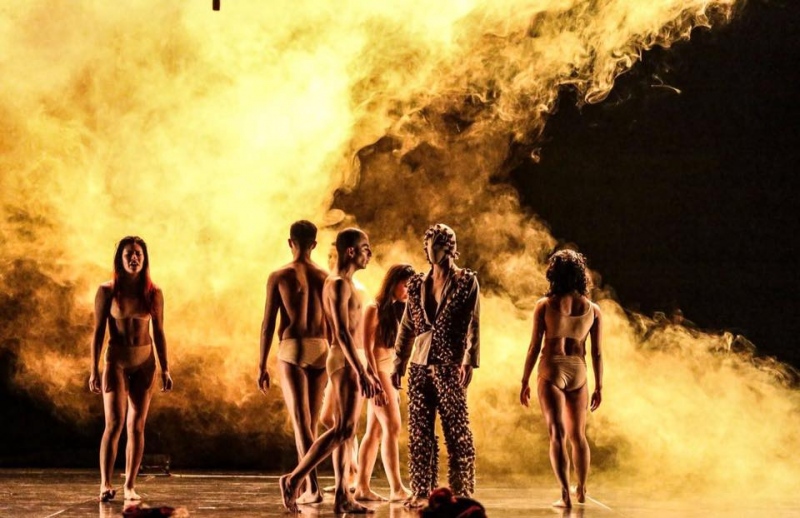 In intimate sessions I interact with the spectators and they become part of the landscape of the piece. The performance, with an autobiographical point of view, sharing about my Quimbaya indigenous roots, takes them across time and space. I guide them to embody the figure of the jaguar and to articulate their animal side.  The  narrative of the piece researches into a place of interaction to find a connection between animality and humanity as a starting point for a reflection focused on biodiversity under the light of imminent extinction.

ANTHROPOMORPHA -jaguaring-  takes a look at the past-present-future of humankind and its bonding to other (animal)bodies, rethinking our impact in the world and reflecting about what it is to be a human being (dis)connected to ancestral wisdom.

The solo is the first part of the trilogy – Thoughts About the Anthropocene – which asks questions about nowadays crisis in the relationship humans - nature. The second part of the trilogy, IXNEXTIUA, premiered in May 2018 in Mexico City as a coproduction of CEPRODAC Mexico and the Ministry of Culture of Colombia. The trilogy dares a statement on interdependence, mutualism and togetherness and is an attempt to embody our animality and to re-imagine our place in the world. 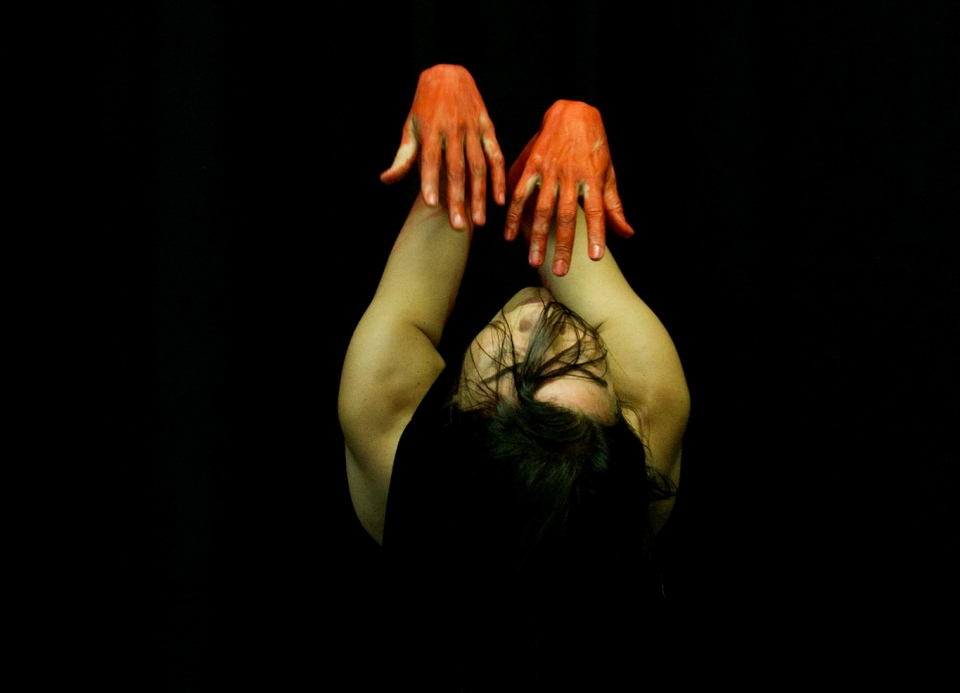 A piece about connecting

“A polka-dot has the form of the sun, which is a symbol of the energy of the whole world and our living life, and also the form of the moon, which is calm. Round, soft, colorful, senseless and unknowing. Polka-dots become movement ... Polka dots are a way to infinity.” Yayoi Kusama

#DOTS is a puzzle, a deceptively simple game where connecting has never been more challenging. Inspired in video games, social networks and the work of Yayoi Sukama, #DOTS pretends to connect the spectartos with the decision making and the staging process. With #DOTS all bodies will become part of the enviroment, creating it together for 15 surprising minutes. 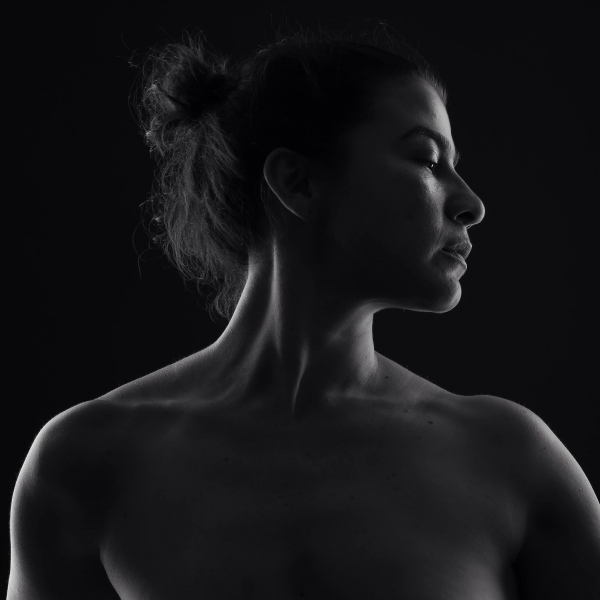 The Belt and Road cities are a colourful reserve of history. Meanwhile, global modernisation and popular culture have brought renewal and transformation to these cities. In 2017, the maestri and young artists of traditional and contemporary art forms from the Belt and Road cities convene in Hong Kong to carry out exchanges through their creative works, including theatre and dance, staged with the setup of One Table Two Chairs concept adapted from Xiqu (traditional Chinese theater/opera). These artists conduct demonstrations and solo performances in a theatre cladded with mirrors on four sides creating infinite reflections and experimentations between the traditional and the contemporary.

With students of the educational program of Zuni Icosahedron 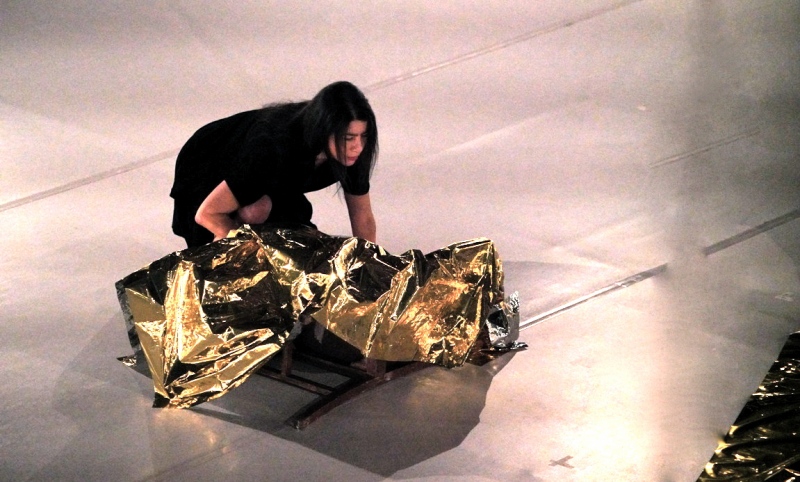 Backward is a relative direction. The most common relative directions are left, right, forward(s), backward(s), up, and down. No absolute direction corresponds to any of the relative directions. This is a consequence of the translational invariance of the laws of physics: nature, loosely speaking, behaves the same no matter what direction one moves. As demonstrated by the Michelson-Morley null result, there is no absolute inertial frame of reference.  Relative directions aloud us to move towards life, to make choices, to relate and to participate in another person’s (or thing’s) vulnerability, mutability. By changing directions, we fight and struggle, testifying how time relentless melt. By slicing out a moment, freezing it, we are compelled to understand that life and its phenomenon are inaccessible and that as time goes on everything vanishes. But, are be able to walk our path again? 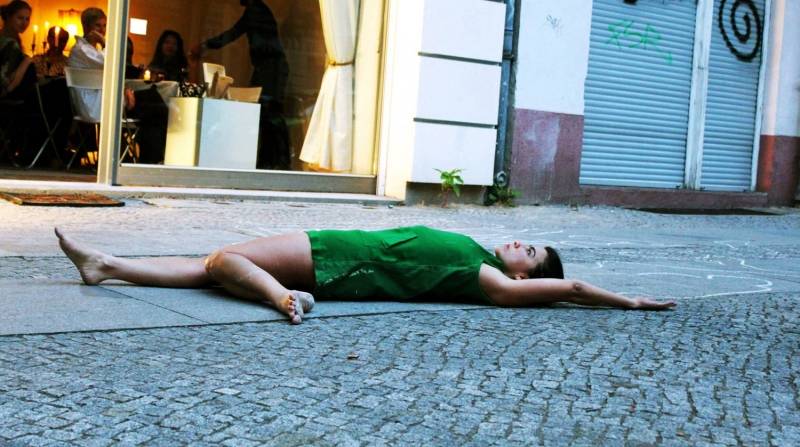 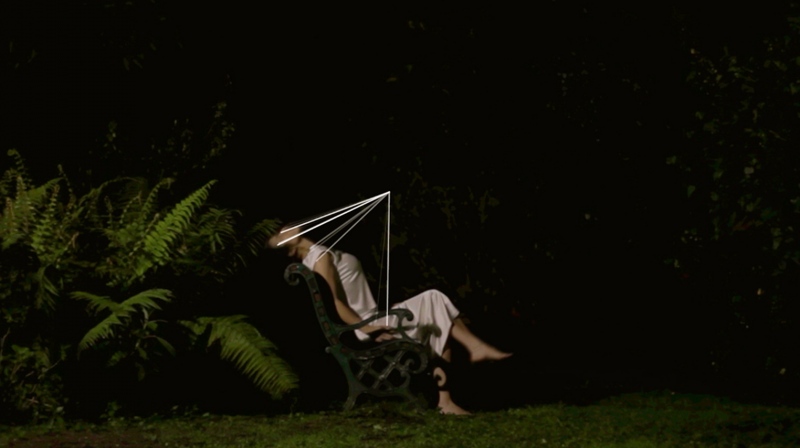 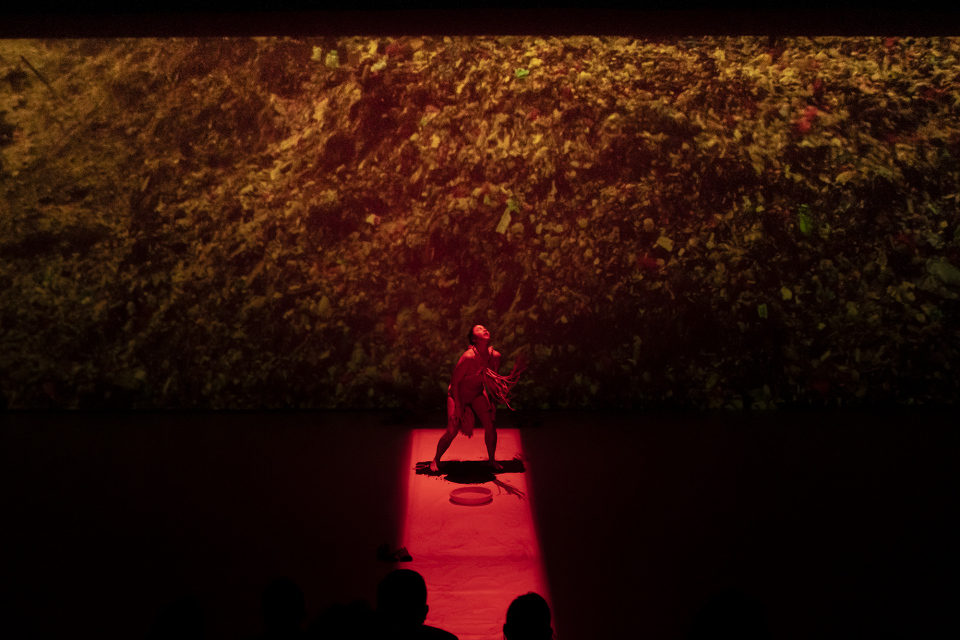 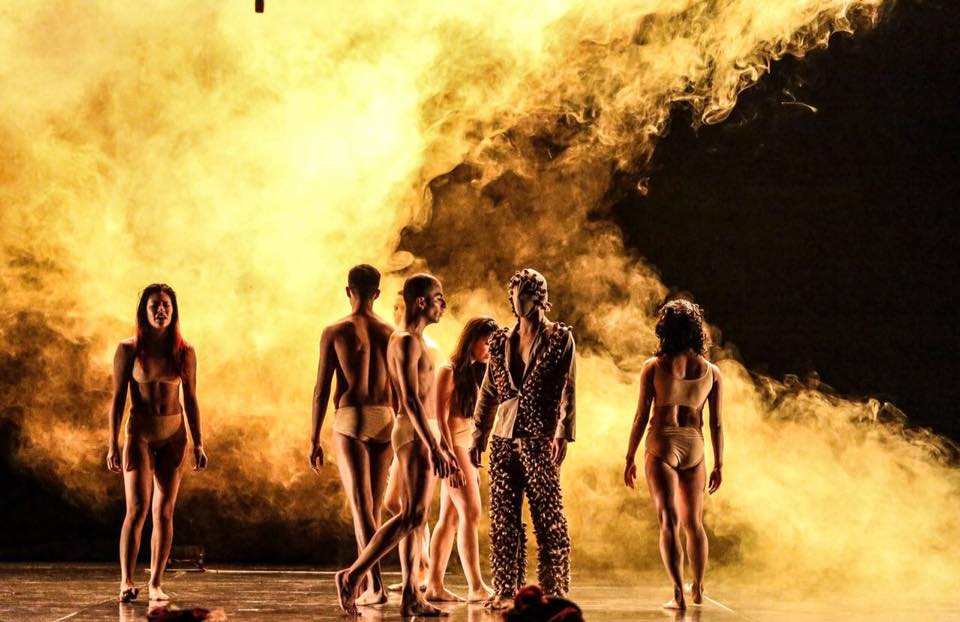 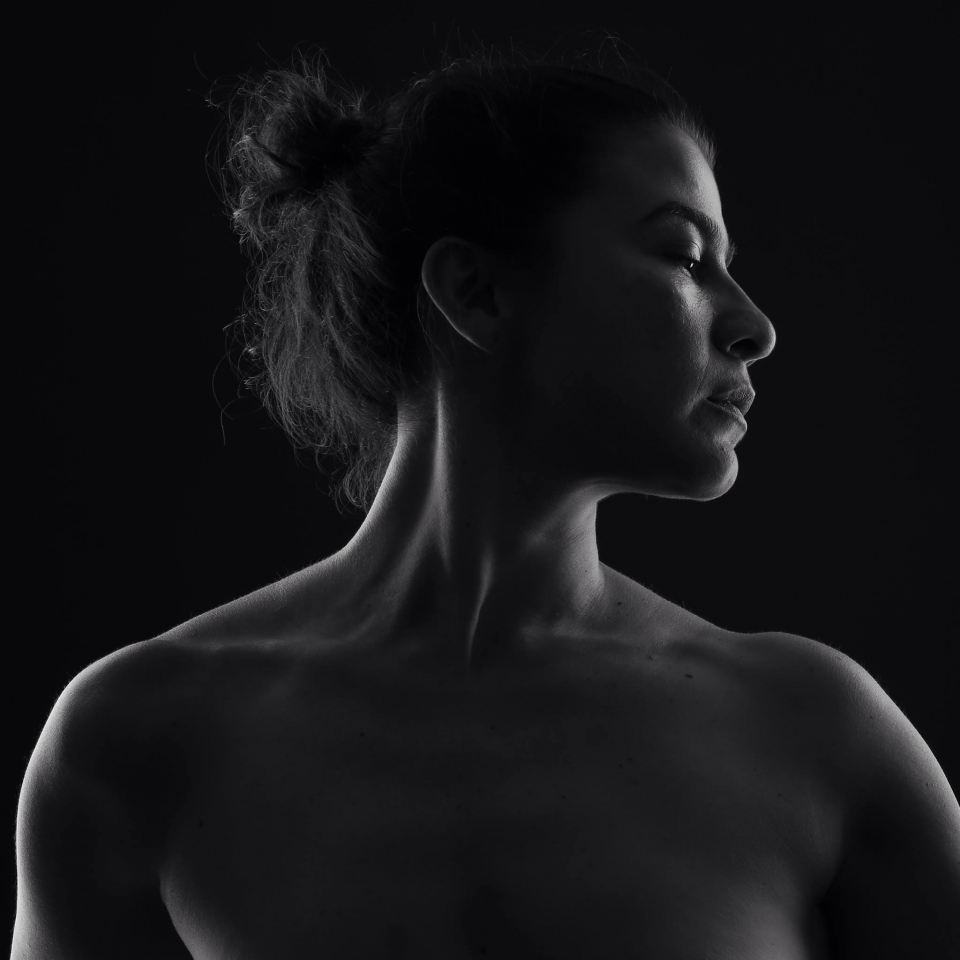 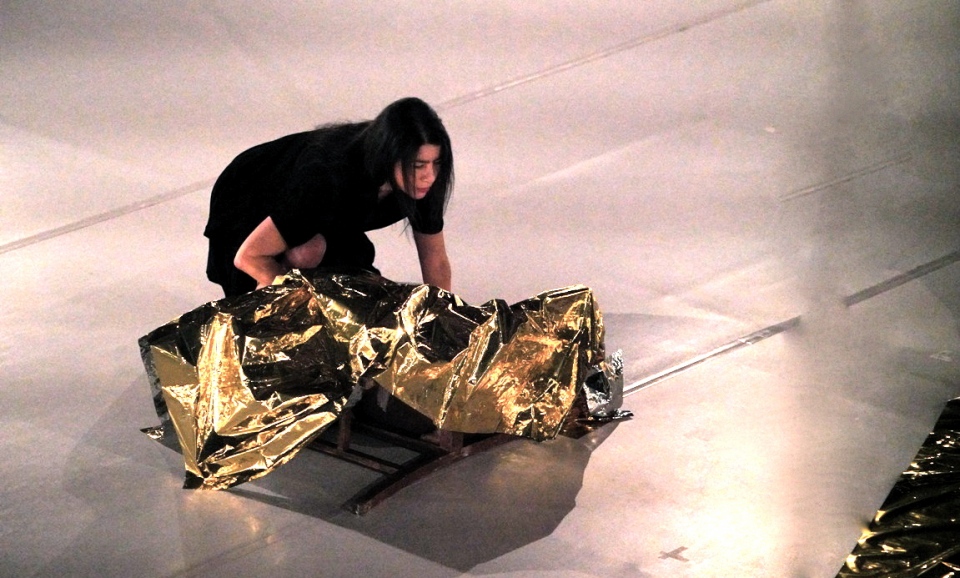 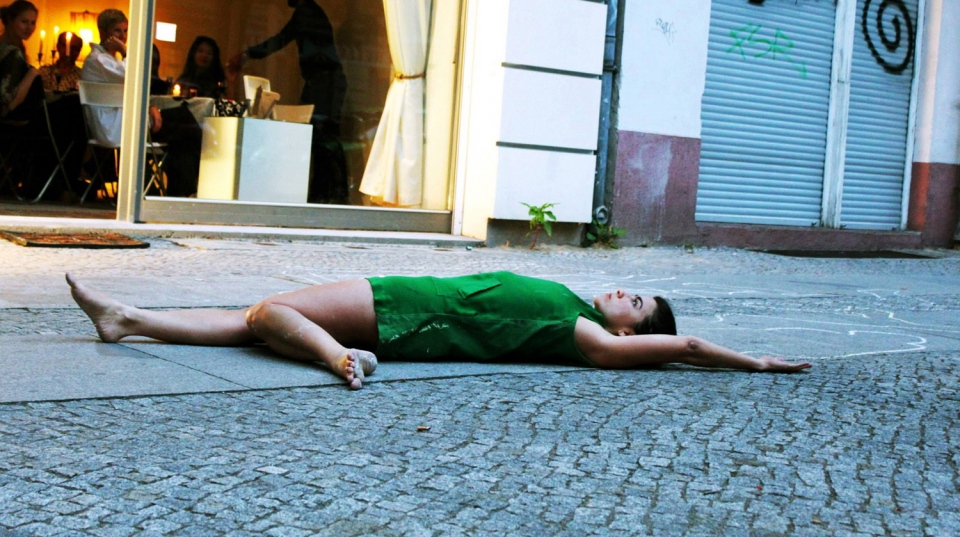 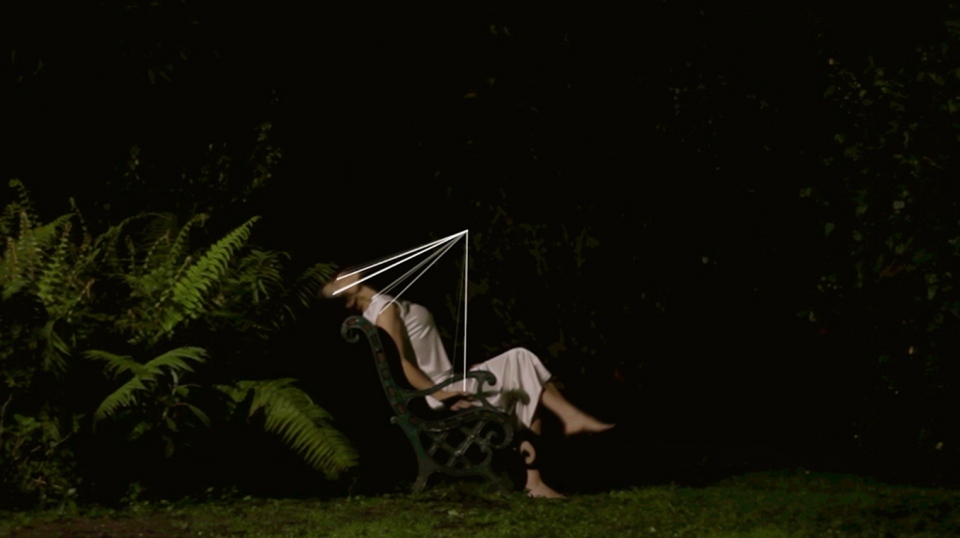